There can be absolutely no doubt in the fact that Ajmer is a great tourist destination as it consists of a large number of forts, palaces, temples, parks and gardens that play an important role in taking the standard of tourism in Ajmer to a very high level. People who visit the city of Ajmer should also make it a point to visit the other important places located close to Ajmer. Mentioned below are various weekend destinations that can be considered for spending a good time near Ajmer.

It takes approximately 1 hour 53 minutes to reach Jaipur from Ajmer. The palaces, havelis and forts of Jaipur are very gorgeous and they attract a large number of tourists from all over the world. The city is very rich in its culture, tradition and historic heritage and it is something that plays an important role in attracting people towards this place. The main tourist spots of Jaipur include Amber fort, Hawa Mahal, Nahargarh Fort, Ganesh Pol, Sheesh Mahal and Jal Mahal.

To know about the different aspects of Jaipur click here

Shekhawati is basically a desert region that lies at a distance of 92 kilometers from Ajmer and it takes 1 hour 58 minutes to reach Shekhawati from Ajmer. It serves to be an important city because of its historic past. Shekhawati is popularly called the “Open Art Gallery of Rajasthan” and is famous for the painted havelis, historical structures and the forts that it possesses. Some important tourist spots in Shekhawati are Morarka Haveli Museum, Jagannath Singhania Haveli, Haveli Nadine, Prince Dr. Ramnath A Poddar Haveli Museum and Khetri Mahal. Apart from the above mentioned havelis, there are some important forts located in Shekhawati that can also be visited and they include Mukundgarh Fort, Dundlord Fort and Mandwa Fort.

Nagaur lies at a distance of 90 kilometers from Ajmer and it takes 1 and a half hours to reach Nagaur from Ajmer. There is Nagaur Fort which is basically a sandy fortress constructed in 2nd century by Nagavanshis. Apart from the Nagaur Fort, people visit Tarkeen Dargah which is considered to be an important Islamic pilgrimage. The famous Jain Glass Temple entirely made in glass is another attraction. Other destinations are Sajji ka Tanka, Deepak Mahal, Hadi Rani Mahal, Rani Mahal and Akbari Mahal, Barli, Nath Ji ki Chhatri, Bansiwala Temple and Cenotaph of Amar Singh Rathore.

The town called Tonk lies at a distance of 143 kilometers from Ajmer and it takes approximately 2 hours 49 minutes to reach Tonk from Ajmer. It is located on the banks of River Banas. The town was a princely state in the past that was ruled by several dynasties until the independence of India. 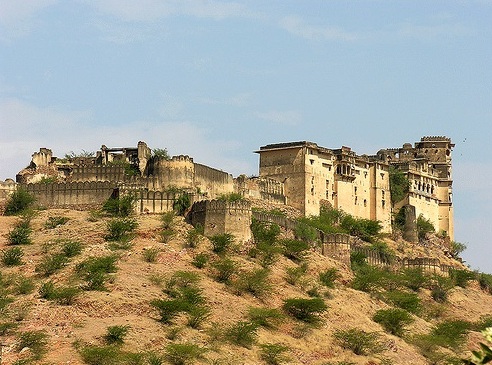 Pali lies at a distance of 171 kilometers from Ajmer and it is takes 2 hours 32 minutes to reach Pali from Ajmer. It is basically an industrial city of Rajasthan. This city lies on the banks of River Bandi. Earlier, Pali was popularly known as Palli or Pallika. Paliwal Brahmins resided here and thus the name Pali. The city of Pali is famous for its possession of a very large number of textile industries and it has also served as an important trading center for ages in history.

Bundi is located at a distance of 217 kilometers from Ajmer and the approximate time required to reach Bundi from Ajmer is 3 hours. It lies in the Hadoti area of Rajasthan. Bundi is a must visit place in Rajasthan because of its possession of pillars and brackets that are beautifully carved, Rajput architecture, splendid palaces and ornate forts. The beauty of this place gets enhanced with the breathtaking waterfalls, lakes and sparkling rivers. A very large part of the city of Bundi is found to be enclosed with sylvan and it also accommodates very rare varieties of fauna and flora. Bundi also serves as a great source of inspiration for authors, painters and artists. Step wells that are popularly called baoris are specialty tourist spots of Bundi.

Khimsar is a very tiny hamlet located at a distance of 171 kilometers from Ajmer and it takes 2 hours 53 minutes to reach Khimsar from Ajmer. It is situated at the edge of the Thar Desert in Rajasthan. Khimsar is not a tourist spot but it is popular for the water body that it possesses in the center of the village and it almost appears like an oasis.

Ladnun is located at a distance of 176 kilometers from Ajmer taking approximately 2 hours 33 minutes to reach here. This city was previously called Chanderi Nagari. Acharya Tulsi, the founder of the Jain Vishwa Bharti University and Anuvrata took birth here. 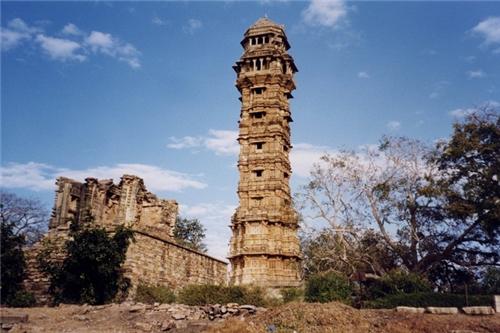 Chittorgarh is spread over an area of 700 acres and lies at a distance of 192 kilometers from Ajmer. It takes 2 hours 42 minutes to reach Chittorgarh from Ajmer. The city is an important tourist destination being home to towers, palaces, temples and forts.

Sikar lies at a distance of 176 kilometers from Ajmer and it takes 3 hours 2 minutes to reach Sikar from Ajmer. The city was previously known as ‘Beer Bhan Ka Bass’. People who like to have a view of the industrial scenario of Rajasthan should always visit here as it is an industrial town.

The distance of Kota form Ajmer is 219 kilometers and it will take 3 hours 57 minutes to reach the city from Ajmer. The city is considered to be one of the most famous cities of Rajasthan located on the banks of River Chambal. Kota is also called the industrial capital of Rajasthan because of its major industries and power plants. Know more about Kota here

Abhaneri is located at a distance of 227 kilometers from Ajmer and it will take approximately 3 hours 27 minutes to reach the place from Ajmer. The village is famous for its colossal step well named Chand Baori which is one of the most beautiful step wells in India. Abhaneri is a very small village but it is thronged with tourists all round the year.

You can enjoy your weekends, considering these many places close to Ajmer!