Urs of Khwaja Moinuddin Chishti is one of the main festivals celebrated in Ajmer. This festival is celebrated in the month of May and is considered to be one of the most religious festivals in India. The festival is organized and conducted at Dargah Shariff which the holy shrine of the Sufi saint and pilgrims irrespective of whether they are Muslims or of any religion, visit the Dargah during the festival.

Urs marks the death anniversary of the Sufi saint Khwaja Moinuddin Chishti and devotees from all corners of the world visit the Dargah to pay their homage. During Urs the entire ambiance in Ajmer gets euphoric with night long qawaali sessions and prayer meeting being held in not only the Dargah but at homes as well. People offer chaddars (blankets) to the tomb, which marks as a sign of resting.
The festival continues for six days featuring dhikr or zikr Qawwali songs that are sung all the night long. 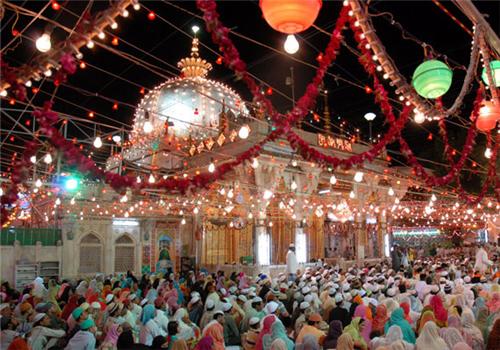 History Behind the Festival

Urs of Moinuddin Chishti is believed to have started being celebrated in the year 1212 and since then it is celebrated every year during the first week of the Islamic month of Rajab after seeing the moon in the seventh month of the Islamic calendar. Drum beats are used to herald the inauguration of this grand annual ceremony at the Dargah Sharif.

Urs is a term that has been derived from the term “Uroos” meaning “the ultimate meeting of God with a normal human being”. Legend has it that the Sufi saint spent the last six days of his entire life in isolation in a prayer room known as Huzra and it was on the sixth day of Rajab that the saint died.

First Day of the festival


Sixth day of the festival of Urs

Lengthy queues that cover several kilometers are generally found thronging the way that passes beside the tomb at the shrine. It can also be noticed that outside the premises of the Dargah, two huge cauldrons cook a form of sweet rice or ‘kheer’ that is garnished with condiments and dry fruits and is served as sanctified food or ‘Tabarukh’ to all the people who visit the Dargah during Urs. 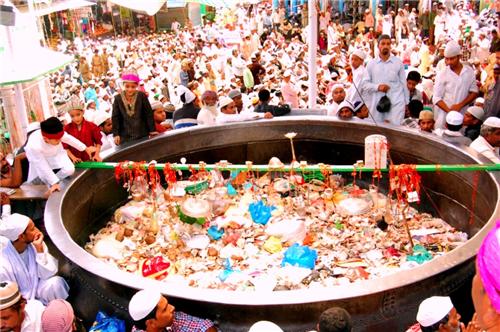 Offerings of the Pilgrims during Urs

The pilgrims visiting Dargah Sharif during Urs for the purpose of seeking the blessings of Khwaja Moinuddin Chishti make various rich offerings that are popular known as ‘nazrana’ at the holy shrine of the Sufi saint. The rich and exclusive offerings of the pilgrims include rose flowers, jasmine flowers, perfumes, incense and sandalwood paste. The devotees also offer ‘chadar’ (blankets), ‘neema’ and ‘ghilaph’ (body covers) which are considered offerings at the tomb. The devotees at the Dargah bring all their offerings on their head and hand them over to the Khadims.

Eating at the Dargah during Urs

Dargah Sharif is situated at the concurrence of three most important bazaars and therefore there are a lot of things that can be eaten during Urs festival at the Dargah. The bazaars located close to the Dargah consist of a large number of eat outs and restaurants that serve a wide variety of dishes which are mainly non-vegetarian. There are guest houses located on the road that leads to the Dargah that offer accommodation ranging from luxurious to economical. The shops that are found close to the Dargah generally deal in selling prayer mats, flowers, textiles, general merchandise and rosaries.

Ajmer lies at a distance of 132 kilometers from Jaipur and 198 kilometers from Jodhpur. The city is very well connected to some of the most important cities of Rajasthan namely Jodhpur, Bikaner, Kota and Udaipur. The Ajmer railway junction is also an important railway station in the city. During the festival of Urs, there are special buses introduced by the government that ply from every city in India and carry people to the city of Ajmer and then back to their respective cities. Urs festival is widely celebrated not only in Ajmer but throughout India and it is only because of this reason that huge crowds of people are found at the Dargah during Urs.

Urs is the main festival of Ajmer and it is a festival when people of all religions come together.

Explore more about Culture of Ajmer