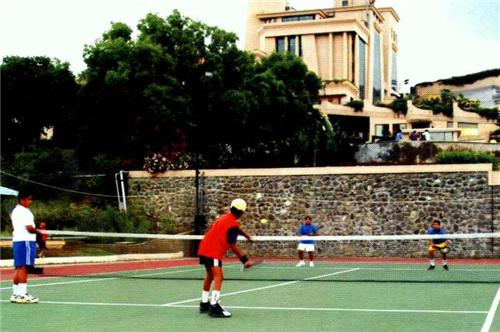 Sports is not a very developed sector in Ajmer because of the fact that the city is more of a pilgrimage center. The people of Ajmer are not found to be very fond of sports and till date there have been no eminent personalities that have served some of the important games from Ajmer. However, it has to be noted that some of the important sports in India like cricket and tennis are found to be developing in the city as there are a good number of tennis courts and cricket stadiums located in Ajmer.

Football is not played on a wide basis in Ajmer and the people of Ajmer do not have clear information about this sport. There are no coaching centers available in Ajmer that provide coaching in football.

Cricket is the favorite sport of India and the same goes for Ajmer also. The people of Ajmer are found to be very fond of cricket and there are a good number of stadiums for cricket also located in Ajmer.

Some of the sports stores  located in Ajmer deal in the supply and the sale of the best sports equipments and accessories that can be of good use for the people who are fond of sports in Ajmer.

Sports activities of different kinds are not quite prevalent in Ajmer and there are some steps being taken to make sports an important sector in the city.