Ajmer is basically a historical region based in central Rajasthan and it served as an important center of the Chauhan Empire during the 11th and the 12th centuries. The region consists of Ajmer district at present bounded by Marwar in the west, Dhundhar in the northeast, Hadoti in the southeast and Mewar in the south. 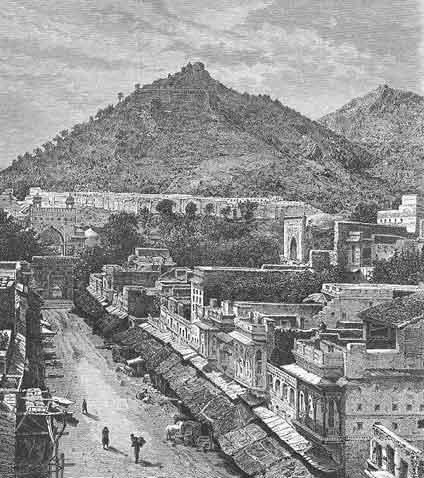 The city of Ajmer remained a very important stronghold of the Chauhans till 1193 when Prithviraj Chauhan, the last Hindu ruler was defeated by the Afghan ruler, Mohammad Ghori. With the defeat of Prithviraj Chauhan, Ajmer was offered vulnerable to various gory battles and invasions. Finally, Ajmer became an important part of the Mughal Empire when the Mughal Emperor Akbar granted Ajmer the status of being a province in the year 1556. Akbar also used Ajmer as the headquarters of his campaign in the state of Rajasthan.

Since times immemorial, Ajmer has been a pilgrimage center for the Muslims as well as the Hindus and this is one specific feature that offers the city of Ajmer, its real character. The city serves to be a genuine amalgamation of Islamic and Hindu heritage. The history of Ajmer is truly great and it is quite promising as well.

Chronology of Events in Ajmer

The history of Ajmer is pretty long and significant as many dynasties ruled the region though for short spans. In the very beginning, Ajmer was ruled by the Chauhans and then the rule went into the hands of Mughals. After Mughals, the city was ruled by the Marathas specifically the Scindias from Gwalior. In 1818, Ajmer passed on to the Britishers and the evidence of the British rule in Ajmer is found in monuments like Mayo College and King George Military School in the city.

In 1193, the city the Ajmer was annexed for a very short duration of time by the Delhi Sultanate but it was returned to the local rulers i.e. the Chauhans on payment of some tribute. Mohammad Ghori sacked Ajmer by turning out successful in the raids that were carried out for achieving the empire of Ajmer. It was in the 12th century that Khwaja Moinuddin Chishti, the Sufi saint came to Ajmer from Persia. In 1509, Ajmer turned out to be a major contention source between the Maharajas of Marwar and Mewar and it was ultimately conquered by the rulers of Marwar in the year 1532. Mughal emperor Akbar captured Ajmer in the year 1559.

Ajmer remained in the hands of the Mughal Emperor Akbar until 1770 with some occasional revolts but it passed on to the hands of the Marathas later. From 1770 to 1818 Ajmer served as an important scene of ongoing struggles and at times it was also seized by the Maharajas of Marwar and Mewar and was often retaken by the Maratha rulers. In the year 1818, Ajmer was sold to the East India Company by the Marathas for Rs.50, 000. Since that time onwards, Ajmer enjoyed a stable government even during the Revolt of 1857. During the British rule in Ajmer, the city was governed by an Agent who was appointed to help the Governor General in his duty of overseeing Rajputana. After India’s Independence in the year 1947, the position of Ajmer in the form of a centrally administered region was retained by Ajmer under a Chief Commission for a short span of time.