Ajmer is one city in Rajasthan that has always been marked as a very important city in the history of India. Several rulers of India have ruled Ajmer in the past so the city has many historical sites to see. Most of them were built by the Mughal and Rajput rulers serving as good exhibit of Islamic and Hindu architecture. Here's presenting you information on them: 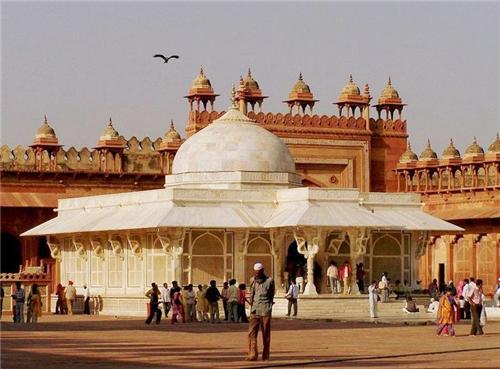 Dargah Sharif is one of the most significant places of pilgrimage for the Muslims all over the world. Yet it is visited by people of all castes and creeds. Dargah Sharif accommodates the shrine or the mazaar of the great Sufi saint, Khwaja Moinuddin Chishti also called Garib Nawaz and it is visited by thousands of tourist every year. The Urs festival is celebrated with great fervor at the Dargah.

Akbar’s Palace and Museum in Ajmer

Akbar’s Palace was built by Emperor Akbar. The palace lures everyone because of its amazing structure. It stays flanked by a couple of parallel and dense walls. It has served as the place where Jahangir set up his meeting with Sir Thomas Roe, the British Ambassador. This palace was constructed in 1570 and is considered to be one of the mightiest bastions located in the southeastern side of Rajasthan. The palace consists of many rooms and was basically intended for the troops of the emperor while they stayed in Ajmer.

The impressive palace was successfully transformed into a museum in the year 1908. The museum within the palace holds some of the classic reminiscent of the Mughal and the Rajput reigns and also some Hindu figurines dating back to the 6th and the 7th century. The museum is very good in exhibiting ancient and medieval arsenals and artillery, stone sculptures and fabulous paintings that make the visit here quite worthwhile. 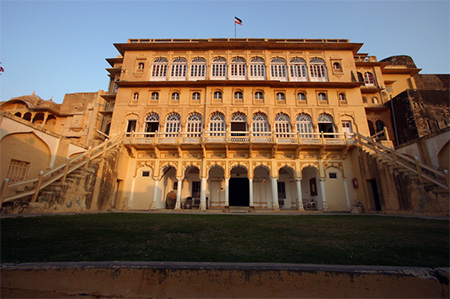 Kishangarh fort is a very imposing structure that was constructed in 1653 by Maharaja Roop Singh. This fort is located at a distance of 27 kilometers from central Ajmer and it appears in the form of a very small and sleepy hamlet. The fort served as the capital of the Rathores who ruled the princely state and at present it is being nurtured as one of the most excellent schools of 18th century miniature paintings.

The Roopangarh fort is a historical monument of the 17th century and it was also built by Maharaja Roop Singh. This fort has been transformed into a magnificent and beautiful luxurious hotel possessing royal elegance and ambiance. The hotel in the form of Roopangarh fort renders much comfort to its visitors with its outsized rooms, open log fires during winter and regal furniture.

The fort entices its visitors with the old passageways, battlements, jails, foundries, granaries and armories that it possesses. It also offers pleasant atmosphere, magical evenings, intense music of the desert and splendid sights that completely enthrall a viewer. The fort is truly a very amazing assimilation of modern amenities and ethnicity and is considered to be ideal for memorable holidaying.

Taragarh fort located in Ajmer is considered to be the most important seat of the Chauhan rulers in the past. It also claims to being the very first hill fort in Asia. The Taragarh fort is believed to have been built in those times when the mountain ranges called Aravalli were found lying above snow-lines. Taragarh Fort is considered to be one of the oldest hill forts in the world.

The fort was constructed by Ajaypal Chauhan. When the fort fell into the hands of the British it was dismantled and transformed into a sanatorium for stationing the troops of the British cantonment at Nasirabad and this was all done by the orders of Lord William Bentinck. The Taragarh fort is very huge and it stands as a guard to the city of Ajmer. It consists of a total of six gates and it also consists of Miran Saheb ki Dargah who served as the Governor of the fort. The fort offers a panoramic sight of Ajmer and at the same time it possesses immense historical and archaeological importance.

Naguar Sharif consists of two very important mazaars namely Hazrat Sufi Hamid Uddin Nagori and Khalifa of Sultan ul Hind Khwaja E khwajgan Hazrat. Nagaur Sharif is considered to be one of the most important historical monuments for the Muslims in India.

Sambhar Sharif lies at a distance of 120 kilometers from Ajmer Sharif and it consists of a mazaar of Hazrat Khwaja Hisamuddin. People even from distant places visit here in large numbers.

Sarwar Sharif is the shrine or the mazaar of Hazrat Khwaja Fakhruddin, the eldest son of Khwaja Moinuddin Chishti who died in the town of Sarwar that lies at a distance of 40 miles from the city of Ajmer. Sarwar Sharif is located very close to a pond in Sarwar and the Urs festival is celebrated in great devotion at his shrine.

Chilla Bare Pir Sahib is located on top of a hill towards the south of Dargah Sharif and it stands in the form of a tomb that is green in color. It is believed that a stone from the Holy Mazaar of Hazrat Piran-e-Pir Dastagir lies buried at this place and this is the reason why it is called Chilla Bare Pir Sahib.

Nizam gate was erected by The Nizam of Hyderabad Deccan namely Mir Osman Ali Khan and this gate is the main gate of Dargah Sharif. The gate was erected in the year 1911. There is an appointed time when small drums start beating at the gate during the night and the day. The top of the gate offers a splendid view of the Dargah Bazaar.

Shahjahani Gate was constructed by Emperor Shahjahane. The gate is located immediately following the Nizam gate. It used to serve as the main gate of Dargah Sharif before the erection of the Nizam gate. The gate has the Kalma Sharif inscribed in beautiful style above its main structure. The gate possesses doors made from very fine timber and is covered with silver-plated metal. This gate also has two very large beating drums.

Akbari Masjid is situated between Buland Darwaza and Shahjahani Gate towards the right hand side. It was constructed by Emperor Akbar. The entire Masjid is erected with red sand stone and consists of a religious institution or madarsa namely Darul-uloom.

Buland Darwaza stands in the form of a huge entrance constructed by Mahmood Khilji. Before the conduction of the Urs festival at Dargah Sharif, a flag is hoisted at the very top of this gate and a grand ceremony is also held on 25th Jamadiulsaani before the Urs festival that starts on 1st of Rajab.

Mazaar or Tomb of Khwaja Sahib’s Daughter in Ajmer

The name of Khwaja Sahib’s daughter was Bibi Hafiz Jamal and her tomb is located towards the south within Dargah Sharif. The tomb also consists of a very small dome that has a kalas on top. The tomb doors are found to be silver plated.

Ibadat Khana is the place of recitation and prayers located within Dargah Sharif towards the southern gate of the mazaar and it is used for the recitation of the Holy Quran.

Jannati Darwaza is also a gate located towards the west at Dargah Sharif and it lies just opposite to the shrine of Gaiti Ara. The doors of this gate are covered in silver metal. The gate is opened four times during the entire year, twice on Ids, during Urs and on the 6th of Shawwal.

Aulia Masjid was the place where Khwaja Moinuddin Chishti stayed for some time during his visit to Ajmer for the first time. This place at present has been transformed into a beautiful mosque found to be made of white marble. This Masjid is used for reciting the Holy Quran and prayers of thanks giving.

This is a very small hall that is located towards the south of the tomb of Khwaja Moinuddin Chishti and this hall was constructed by Nawab Muhammad Ali from Arcot in the 18th century for providing comfort to the devotees who visited the Dargah. This hall is also used for conducting death rituals of Khadims who serve at the Dargah Sharif.

Jama Masjid is also called Shahjahani Mosque and is considered to be a very fine piece of Mughal architecture in Ajmer. The mosque carries a very beautiful inscription of all the thrity-three Quranic verses and the ninety-nine scared names of Allah.

Dada Bari is the samadhi sthal of Jindutta Suri. It is considered to be the oldest samadhi sthal in Ajmer that dates back to more than nine centuries. Dada Bari is commonly called Shri Jain Swetambara Khartargacchacharya Jinduttsuri Dadabari which is located at Pal Bisla or Jindutta Suri nagar in Ajmer. It lies at a distance of 2 kilometers from the main railway station and bus stand of Ajmer and is spread over an area of nine thousand square yards.

Victoria tank was built in the fond memory of Queen Mary who visited Dargah Sharif. The British Government constructed the roof of the Victoria Tank in order to make it convenient for the devotees to worship the shrine of Khwaja Moinuddin Chishti.