One of the most beautiful artificial lakes located in Ajmer is the Ana Sagar Lake. The entire lake is spread over an area of 13 kilometers. The lake gets dry in the summer months. Ana Sagar Lake serves as a jewel of the city of Ajmer because of the picturesque beauty that it offers. The lake shimmers in and creates illusions, the waters of the lake seem to be lit up in the evening as they reflect the fluorescence of the entire city of Ajmer. Walking on the sides of the lake on a moonlit night can give you a fairytale experience. Ana Sagar Lake is one of the most scenic places in Ajmer and has remained a stupendous tourist attraction since the 11th century. 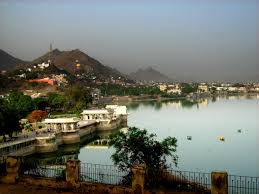 The lake offers a form of a salvation for Ajmer and fetches liveliness to the locals of Ajmer, be it any part of the year. Not only does the lake add great appeal and beauty to the city but also serves as an important source of living for the people of Ajmer. Great income has been drawn by the tourism department of Ajmer. People in huge crowds visit here on a regular basis.

Ana Sagar Lake is considered to be one of the most famous tourist spots in Ajmer that is found to be delimited with attractive gardens and dazzling pavilions. There are several other important attractions found near the Ana Sagar Lake like the ‘Khobra Behroon” temple located towards the south of the lake. Other sightseeing destinations that are easily accessible from Ana Sagar Lake are Adhai-Din-Ka-Jhonpra, Nasiyan, Prithviraj Smarak and Taragarh Fort. There is a small island centrally located in the lake which is easily accessible by water scooter or boat.

The best time to visit Ana Sagar Lake is during the months of October and March because weather during these months of the year remains agreeable, breezy and fresh. At the same time the water level of the lake during this time of the year reaches a good mark offering a very beautiful view of the entire lake. The Ana Sagar Lake not only serves as a lifeline for the people of Ajmer but at the same time it also serves as a lifeline for the picaresque beauty of Ajmer.

Ana Sagar Lake is located very close to Dargah Sharif in Ajmer and the distance is only 1.5 kilometers. People who want to visit Ana Sagar Lake can move towards the northern direction from Dargah Bazaar and they need to cross the Karakka Chowk in order to get to Ana Sagar Lake.

How to Reach Ana Sagar Lake

It is very easy to reach Ana Sagar Lake in Ajmer as the lake is viably linked to different important cities of India through different sorts of transportations like airlines, buses and trains. The best time to visit Ana Sagar Lake is during the months of October and March.

By Air: The closest airport to Ana Sagar Lake is Sanganer Airport that lies at a distance of 130 kilometers from the lake and is located at Jaipur.

By Road: Ana Sagar Lake is located in Ajmer and Ajmer is one city in Rajasthan that is very well-connected to the other cities of India by road. The cities like Ahmedabad, Jaipur, Jodhpur, Agra, Mumbai, New Delhi and Udaipur are connected to the city of Ajmer by the national highway and therefore people can easily visit Ana Sagar Lake by road.

Ana Sagar Lake in Ajmer serves in the form of sustenance of splendor and exquisiteness to the tourists and the locals.